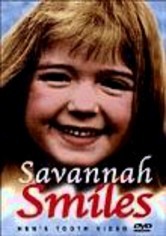 1982 PG 1h 45m DVD
This touching, exciting and beautiful film tells the story of Savannah, a delightful runaway 6-year-old, who is thrown together with two escaped convicts, Alvie and Boots, in a crazy comedy of errors.

Parents need to know that this sweet but dated story treats the apparent abduction of a child lightly -- something that might strike modern-day parents as uncomfortable or inappropriate. There are some heartwarming moments that may bring out some tears. Also expect occasional mild profanity ("hell," "bastard"), some rifle play, beer and chewing tobacco, and lots of Budweiser signage.

The film begins with an outdoor prison break with rifle shots and explosions. Alvie robs a corner market with a gun, which Boots shortly after uses to accidentally shoot out one of the tires of their getaway car. Rifle shots later in the film, but no one is hurt.

Love eventually outweighs greed for two criminals who come to appreciate the innocence of and attachment to a child. The idea that children need love and attention is an important theme.

Budweiser cans and signage are prominent throughout the film.

Alvie is seen drunk with empty beer bottles around him at a bar; the next day he experiences a painful hangover. Alvie chews tobacco. Beer is consumed at a picnic.