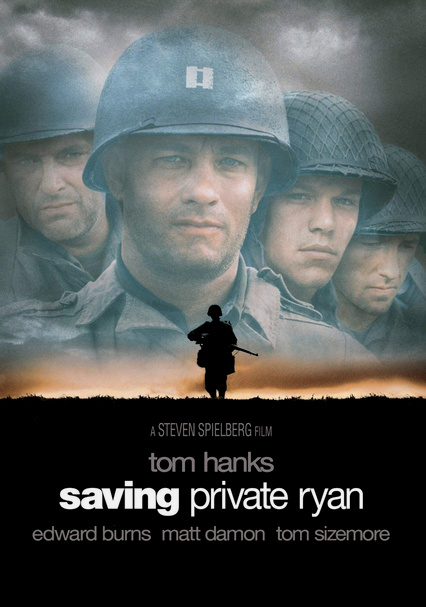 1998 R 2h 49m Blu-ray / DVD
As U.S. troops storm the beaches of Normandy, three brothers lie dead on the battlefield, with a fourth trapped behind enemy lines. Ranger Capt. John Miller and seven of his men are ordered to penetrate German-held territory and bring the man home.

Parents need to know that this is Steven Spielberg's most violent film, especially in the opening 25-minute D-Day invasion massacres. There's no sugar-coating, no "cartoon violence," no nameless, inconsequential casualties like LucasFilm Imperial Stormtroopers. This is unrestrained, ugly, and dirty combat, meant to make the viewer appreciate the monstrous human cost and tragic sacrifice of the Allied beachhead -- a price mostly paid by young men. Stunned, vengeful U.S. soldiers are seen committing what would be considered atrocities (shooting surrendering Germans, as well as innocent non-Germans who can't speak English). Even though characters are religious -- one prays fervently before killing with his sniper skills -- everyone swears a lot, too. Some "special editions" carry supplementary documentary material, including clips of Steven Spielberg's own 8mm war movies he made as a kid.

Dirty jokes and salty stories cracked by members of the platoon.

Graphic, savage battlefield violence, as men are blown up, shot, and dismembered by artillery fire, and bayoneted, beaten, and stabbed in hand-to-hand fighting. Unsparing death comes to sympathetic characters as well as ones we hardly know.

Lots of F- and S-words, "asshole," God's name in vain (or prayed to before killing), and the profane military acronym F.U.B.A.R. is eventually explained.

Capt. Miller is here a paragon of military discipline and fairness, though he too weeps when a friend is killed. He explains in a key moment that in peacetime life he's a schoolteacher, not a career soldier. Even though they bristle at their mission, the men carry out the assignment, at great personal risk. One shows mercy to a German and comes to grievously regret it. Others shoot defenseless and surrendering enemy without thinking twice. Though the platoon is of mixed backgrounds (Jewish, Christian, Italian-American, Appalachian), all are white, which accurately reflects the racially segregated U.S. forces at the time.