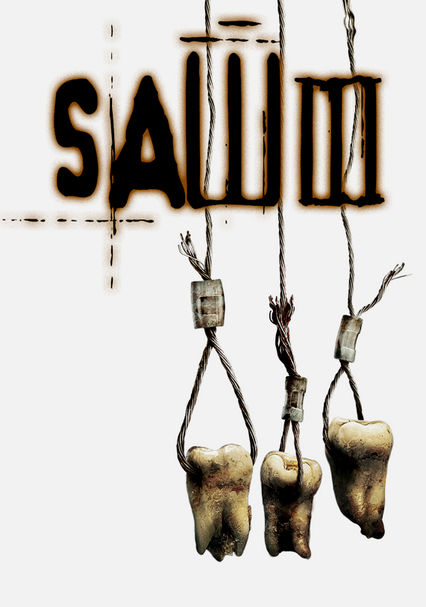 2006 UR 1h 53m Blu-ray / DVD
In his newly fashioned torture chamber, psychopathic killer Jigsaw -- barely clinging to life -- orders his new protégé, Amanda, to kidnap a doctor in this third installment of the horror series.

Parents need to know that this horror sequel isn't for kids, though plenty of gore-loving teens will probably want to see it. Like its predecessors, it follows a series of characters trapped in terrible, torturous situations. Characters meet gruesome, bloody ends: suffocation, freezing, being shot through the neck, being pulled apart while attached to hooks and chains, neck and limbs being twisted and broken, and even a head exploding. One character performs graphic brain surgery, and another -- who's emotionally tormented -- cuts her own thigh. Repeated references to a 6-year-old boy who was hit and killed by a drunk driver. A woman appears getting out of bed (post-sex) with a man; another is shown hanging by her arms, completely naked (full frontal). A doctor pops anti-depressants and appears dazed while working on a little boy in the ER. Profanity includes 35+ uses of "f--k."

Kerry appears in the tub (body visible from the shoulders up); brief scene of adulterers in the same bedroom; woman victim hangs by her arms, chained to a freezer ceiling: she's nude, and you see several full-frontal shots (everything is visible).

Incessant torture, pain, and blood. Torture implements include saws (circular and hack), mechanical devices, hooks, chains, guns, knives, explosives, freezer, a limb/neck-breaking machine; victims are bound and gagged, ripped apart by machines, exploded, sliced, frozen, suffocated by plastic bag, shot, impaled, and nearly drowned in pulverized pig (gloppy, disgusting substance); Amanda cuts herself on her thigh (and in a flashback, you see that she cut herself habitually); a doctor performs brain surgery (graphic, using drill and saw); victims are abruptly grabbed by hooded/masked figure; flashbacks to a little boy on his bike hit by car (still photos); flashback shows Eric (from Saw II) sawing/slamming off his own foot, then attacking Amanda (punching, slamming with board) and calling her names.

Devious death designer Jigsaw (John) preaches against vengance, insisting that he teaches "lessons," but he's a murderer, no matter what he says.

Lynn pops anti-depressant pills; in a flashback, Eric calls Amanda a "junkie bitch" (though you don't see instances of her addiction in this installment).