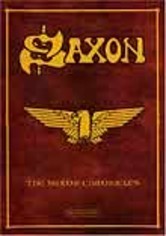 2001 NR 2 discs
British power metal marauders Saxon take the stage at the 2001 Wacken Open Air festival and blaze through a set of their heaviest hits, including "Wheels of Steel," "Princess of the Night," "Motorcycle Man" and "The Power and the Glory." This release also features performances of "Dogs of War," "Cut Out the Disease" and many more, plus interviews, backstage footage and other materials chronicling Saxon's decades-long career.