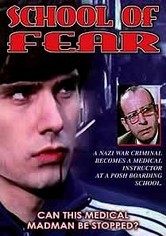 1969 NR 1h 31m DVD
When a former Nazi doctor takes on a faux identity to teach at a wealthy boarding school, he doesn't count on the father of a student recognizing him from the concentration camps. How far will he go to protect his true identity and escape justice? How many more people will die because of his legacy of hate? Joachim Fuchsberger, Konrad Georg, Karin Hubner, Petra Schürmann and Horst Tappert star in this psychological thriller.