School of the Holy Beast 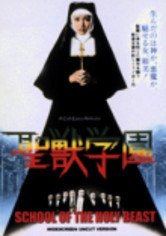 School of the Holy Beast

1974 NR 1h 34m DVD
Yumi Takigawa has always wanted to know what happened to her mother inside the mysterious Sacred Heart Convent. And now, as an "undercover sister," she'll get a firsthand look at the horrors within. Widely considered the most notorious nun-exploitation film, this shocker from Japanese director Norifumi Suzuki is packed with plenty of masochism -- including a legion of nuns armed with whips and a lesbian mother superior.