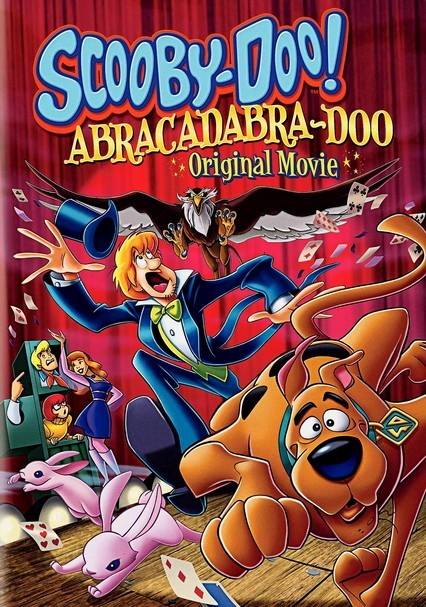 2010 NR 1h 15m DVD
While paying a visit to the secluded Whirlen Merlin Magic Academy, Scooby, Shaggy, Daphne, Fred and Velma attempt to stop sinister forces that want the school closed. But to thwart the baddies, the gang will have to face a slew of menacing monsters. Full of surprising twists and turns -- not to mention the goofy antics of everybody's favorite cowardly canine -- this animated adventure delivers a spine-tingling blend of magic and mystery.

Parents need to know that there are some frightening images in this Scooby movie, including a screaming banshee and a griffin who haunts the characters. But, in keeping with the Scooby series tradition, through teamwork, the gang figures out that a couple of bad apples are behind the shenanigans that are frightening people away.

Not as violent as it is scary -- a banshee who has a placid female face turns ghoulish, screaming and chasing the gang. The griffin that haunts the grounds of the Whirlen Merlin Magic academy is huge and terrifying. Perilous moments where Shaggy and Scooby nearly fall off of a bridge.

The gang works as a team to solve mysteries. Plus a lesson in forgiveness.

Scooby and Shaggy load up on junk food whenever they can. Mentions of burgers, ice cream, shakes, and the chewy, gooey pizza that Shaggy drools over.