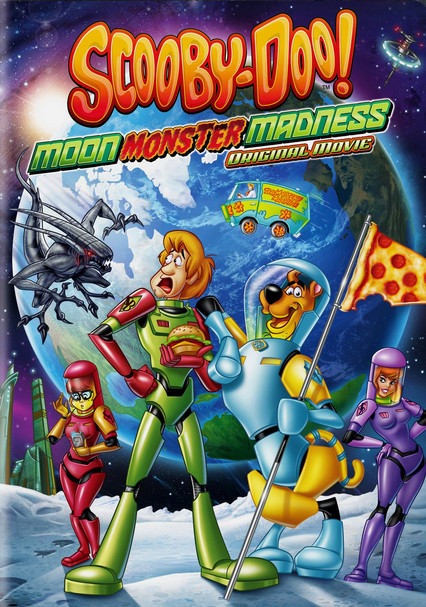 2015 NR 1h 20m DVD
It's one giant step for dog-kind as Scooby-Doo and the Gang blast off for an epic, other-worldly adventure in this all-new original movie! After winning the last 5 seats in a lottery, Scooby-Doo, Shaggy, Fred, Daphne and Velma are off to space in billionaire Sly Baron's brand new ship, the Sly Star One.

Parents need to know that Scooby-Doo! Moon Monster Madness is a typical Scooby-Doo franchise release. Familiar quirky members of Scooby's gang solve a simple mystery with an ample supply of comedy antics, parody of existing cultural icons, and cartoon action. Besides the usual explosions, chases, bumps on the head, and narrow escapes, this entry's central villain is a black, reptilian, fanged alien monster who is a menacing presence in many sequences. It may be too scary for very young kids or sensitive kids who aren't comfortable with imaginary jeopardy. Straightforward messages about teamwork, coping with fear, and self-confidence are delivered with humor. Some stereotypical characters (astronauts, an alien resistance fighter, a media tycoon, and a football player) are satirized with good-natured humor.

Cartoon scares, mostly from what appears to be an alien monster, who menaces the spaceship in which the gang is traveling and later on the moon. It's a black, reptilian wraith-like demon with sharp teeth, a horrible roar, and glowing red eyes. It flies through the air, chases the heroes, damages the spacecraft, and scares the passengers in numerous scenes. No substantial injuries or deaths. Other potentially frightening moments: pounding footsteps, explosions, heroes trapped in space. In a cartoon-within-a-cartoon, the gang imagines comic alien attacks on humans; they battle and defeat the not-so-scary aliens using their unique skills.

Discussion of the wearing of "atomic" diapers and emptying the resulting "payload." Name-calling: "four-eyes," "you're crazy."

If you put your mind to it, you can do anything. Teamwork and respect are important qualities. It's important not to argue; better to work together against a common threat. A strong heroic character reveals that he has fears like everyone else; it's crucial to learn how to handle fear.

The 23rd direct-to-DVD and streaming entry in the Scooby-Doo franchise, which includes toys, products, games, TV shows, and so on.