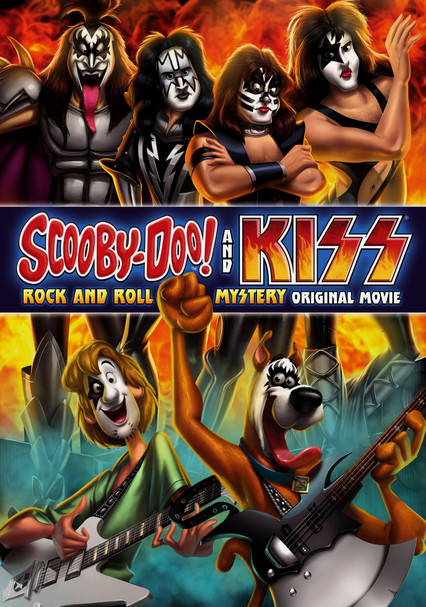 2015 NR 1h 18m DVD
When a ghoul begins to terrorize an amusement park, the Mystery Inc. gang come head to head with the legendary rock group, KISS, who claim they're also there to solve the mystery. Now the two groups must learn to work together as the clues lead them on a cosmic journey to another dimension.

Parents need to know that Scooby-Doo! and Kiss: Rock & Roll Mystery finds the gang solving a mystery with members of Kiss, the 1970s metal rockers. Frequent visuals of the bizarre, heavily made-up, and costumed band members, a scary villain, and lots of old-school "psychedelic" images make this movie best suited for older elementary school-age kids and up. In addition, there's more cartoon action and violence than in many Scooby films, including lasers, explosions, fires, falls, a witch soaring through scene after scene menacing the gang and a plot to bring total devastation to the world. Volcanoes erupt; ghosts appear; a dangerous witch's accomplices threaten. It has a more complex plot than Scooby fans may be accustomed to. Kiss adds to the boisterous mix with six of their classic hits and one new one, making rock music an important part of this offering.

An action-packed journey through a "phantasmagorical" amusement park, filled with cartoon perils and some scary images: falls, flamethrowers, explosions, a grotesque head, laser blasts, fire breathers, lightning bolts, cackling scoundrels, and narrow escapes. A villainous "Crimson Witch" who travels through the air in a red haze, wreaking havoc on all the heroes as she attempts to bring total devastation to the world. Scooby and Shaggy have multiple teeth-chattering moments as the "red evil" seems bent on destroying the whole team.