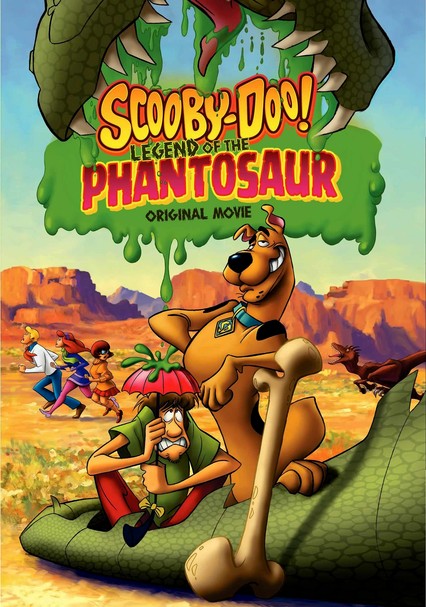 2011 NR 1h 15m DVD
Scooby-Doo and his friends stumble upon a ferocious prehistoric beast when they're relaxing at a desert spa. And it's protecting ancient treasure! The mayhem that ensues includes a rogue motorcycle gang, mad scientists and hypnosis.

Parents need to know that this animated Scooby-Doo adventure features potentially frightening sequences of ghost dinosaurs that may be too intense for preschoolers. As in most of the Scooby gang's escapades, there are some moments of tension and peril, but no one is seriously hurt. In this story, Velma flirts with a like-minded young scientist, and the two go out to dinner and even briefly touch hands. But forget fledgling romance: Scooby and his four teen mates are all about crime-solving collaboration.

Fred says "Nice!" when he sees pictures of women in a bikini in a resort brochure. Velma falls for a nerdy paleontologist, and the two go out to dinner and briefly hold hands.

The "phantosaurs" aren't just spooky ghost-like apparitions; they roar and run and cause people to hide. There are also very real-looking dinosaurs running around frightening the locals. In one scene, Shaggy, who's been hypnotized to become a "fearless hero" whenever he hears the word "bad," gets into a tussle at a diner, where he leaves things in disrepair. A group of bikers looks menacing at first but becomes the Mystery gang's allies.

Scooby-Doo and his teen pals are always there to help protect each other. They're unconditional friends who use teamwork to solve mysteries and help strangers.

No product placement in the movie itself, but the famous Hanna-Barbera characters have a huge merchandise machine based on them, including figurines, stuffed animals, games, DVDs, apparel, and more.

Scooby gets amped up on caffeine when he accidentally drinks it at a diner.