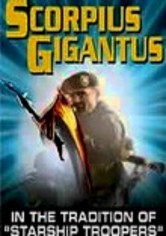 2006 R 1h 25m DVD
A top secret laboratory is developing supervaccines derived from the venom of gigantic scorpions when the military seizes the operation and accidentally releases the monstrous arachnids to wreak havoc on the planet. Now, only the elite organization known as the Delta Force has the power to annihilate the mutant creatures before it's too late. Jeff Fahey, Jo Bourne-Taylor and Jonas Talkington star in this bloody, bugged-out horror flick.