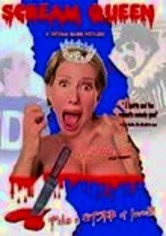 2003 NR 1h 26m DVD
This quirky comedy from director Tatiana Bliss stars Liz Lavoie as Dana Lewis, the reigning queen of schlocky horror flicks. Fed up with the constant stream of shoddy scripts, she yearns for quality roles and is thrilled when she lands the lead in a new indie production. When the movie turns out to be an amateur slasher film produced by obsessed fan Jason Alves (Nipper Knapp), can Dana squeeze lemonade out of the lemon?