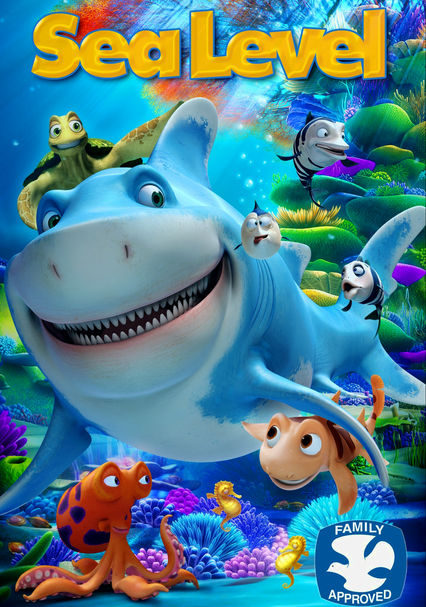 2011 PG 1h 32m DVD
When poachers steal egg sacs from his reef, young bamboo shark Pup embarks on an adventure to save his future brothers and sisters. Whitetip shark Julius goes along for the ride to make sure his pal Pup doesn't get into any trouble.

Parents need to know that despite some bright, colorful animation, and a few appealing heroes, Sea Level is filled with dark images, eerie music, bullying used as humor, scarily-mutated sea creatures, an abusive human father, and characters constantly in fear for their lives. Viewers, especially young ones, will find the film's often disconnected structure and abrupt scene endings hard to follow. If Sea Level is meant as a humorous, cautionary tale about protecting the planet and its oceans, that message is as random and murky as the story itself and the few humorous sequences don't qualify it as watchable.

Scary, mutated sea creatures live in the murky depths of the sea with glowing eyes, eerie sounds, menacing movements; they unexpectedly appear and attack without provocation. A turtle struggles to escape from a plastic bag covering her head. Later she battles an evil serpent in a life-or-death struggle. The heroic fish are in danger from: a rapid-fire spear gun, careening vehicles, a giant hook, an army of mutant crabs, fire, and suffocation. A human father bellows, threatens, and hits his children (the blows are off camera; the sounds are heard).

A father is verbally abusive to his boys: "idiots," "shut up," threatens with a throat-cutting hand gesture, "there'll be hell to pay."

Polluting oceans and waterways threatens our planet. While the film places great value on friendship and loyalty, it also portrays bullying and tormenting others as more comic than hurtful.