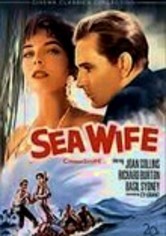 1957 NR 1h 21m DVD
When their ship is sunk off the coast of Singapore, four survivors -- Therese (Joan Collins), Cannon (Richard Burton), Number Four (Cy Grant) and Bulldog (Basil Sydney) -- escape on a lifeboat. As they struggle to make their way to land and back home, Cannon falls for Therese, unaware that she's a nun. Bob McNaught directs this epic World War II-era romantic adventure, based on J.M. Scott's novel.