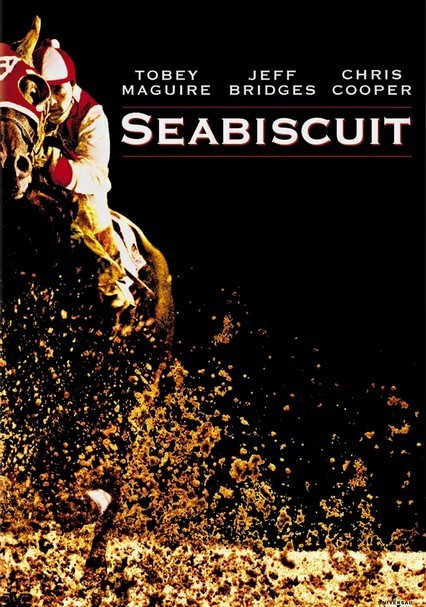 2003 PG-13 2h 21m Blu-ray / DVD
A knobble-kneed colt becomes a winning thoroughbred at the hands of its owner, its unorthodox trainer and its jockey, a half-blind ex-prizefighter, in this Depression-era drama based on the true story of champion racehorse Seabiscuit.

Parents need to know that Red's parents are forced by their reduced circumstances to give him to someone who owns a stable and who offers to put Red up as a jockey. His parents' unexpected abandonment scars him and might frighten younger viewers who, like Red, do not understand why his parents would leave him. There is an off-screen car crash which takes the life of Charles' young son, followed by shock and mourning. Also, Red tries to make some money by amateur boxing -- Red sustains significant injuries and the crowd watching the fight seems quite menacing. There is another sports-related injury which features Red resulting in a mangled leg. In addition, there are references to drinking during the Prohibition, and the radio announcer drinks quite a bit. The jockeys frequent a brothel in Mexico, where there is a scene of implied sexuality between Red and one of the ladies there.

Colorful language and swearing when angry.

Recognition of talent and excellence beyond outside appearances is a theme of the movie.

Social drinking, use of alcohol to forget problems. Lots of smoking.