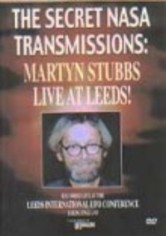 2004 NR 1h 38m DVD
Former Vancouver cable television manager Martyn Stubbs discusses the evidence he gathered from NASA transmissions that seems to point to the existence of extraterrestrial activity in this appearance at Leeds University. Speaking publicly for the first time, Stubbs reveals the incongruities he found in the 2,500 hours of space shuttle communications he recorded using his station's satellite technology over the course of five years.