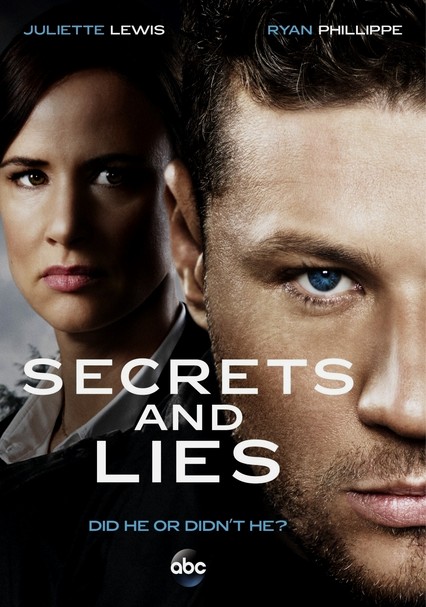 2015 TV-14 1 season
After Ben comes across the body of his neighbor's murdered son while out jogging, the grim discovery leads to a hellish ordeal when Ben becomes the prime suspect. Ben's search for the real killer leads him to uncover a dark layer of town secrets.

Ben Garner (Ryan Phillippe) is about to go from Good Samaritan to murder suspect after he discovers the body of his neighbor's son in the woods. As Detective Andrea Cornell (Juliette Lewis) digs for the truth, town secrets and lies come to the surface and no one is above suspicion.

Parents need to know that Secrets and Lies follows a murder investigation involving a 5-year-old who was found dead in the woods near his suburban home. Blood is minimal, but there is some visible at the crime scene along with shots of the boy's lifeless body. There's also a plot line involving adultery and a teen character dealing with cyberbullying. Words such as "bitch" and "damn" are audible, and there's some social drinking.

The series centers on the death of a young boy; there's some blood, along with some shots of the body, but nothing gratuitous.

Audible words such as "damn" and "bitch."

Though there's an ongoing search for justice, the overall message is that "truth" is far from the surface and few people can be fully trusted.