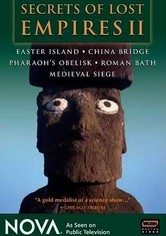 2000 NR 3 discs
This intriguing edition of the "Nova" series follows collaborative teams of archaeologists, engineers and historians as they journey from the Orient to the Occident to reproduce five architectural wonders of antiquity. Among the marvels are Easter Island's massive stone sentinels, the moai; China's rainbow bridges; a 500-ton granite obelisk in Egypt; Italy's famed Roman bathhouses; and the trebuchet, a medieval weapon of mass destruction.