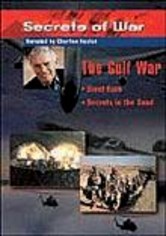 1998 NR 1h 44m DVD
Oscar-winner Charlton Heston narrates this 1998 documentary examining the technology and tactics that helped Allied forces deal an overpowering blow to the Iraqi military during the first Persian Gulf War. Segments entitled "Secrets in the Sand" and "Steel Rain" explain the gadgetry employed in the air and ground campaigns. The film also discusses the nagging consequences of leaving the despotic Saddam Hussein in power.