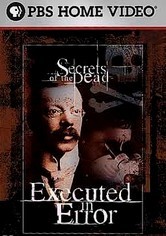 2008 NR 1h 0m DVD
Although he claimed innocence, Dr. Hawley Crippen was hanged in 1910 for murdering his wife after human remains were found in his cellar. Using the latest technology, this program reopens Crippen's case to determine whether he was really guilty. With the help of modern DNA testing, experts gather new information in this almost 100-year-old case, which was widely considered one of the crimes of the century.