Secrets of the Heart 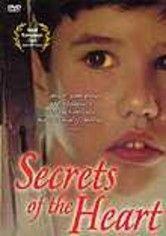 Secrets of the Heart

1997 NR 1h 48m DVD
Living in a small Spanish village in the 1960s, 9-year-old Javi and his friend, Carlos, visit an old, supposedly haunted house. Javi believes he can hear the voices of the house's dead, which are telling him secrets left unspoken in life. At his mother's house, the always-locked room in which his father died fascinates Javi, and he begins to investigate the mysteries of the dead, soon realizing the living have a few secrets of their own.