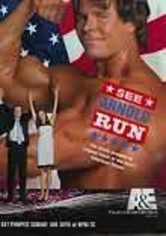 2005 R 2h 0m DVD
From his boyhood days to his bid for Governor of California, this biopic alternates between Arnold Schwarzenegger's (Roland Kickinger) formative years and his 2003 political campaign. Flashbacks show Schwarzenegger as he reaches the peak of his body-building career and sets his sights on Hollywood, two highly public careers that prepared him for the media-blitz of his 2003 political campaign. Mariel Hemingway stars as Maria Shriver.