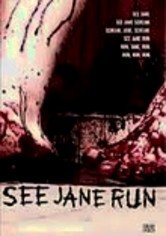 2007 NR 1h 30m DVD
Filmed in the style of 1970s drive-in horror classics, this terror fest follows four teens on a road trip through Texas. The trouble begins when they pick up a hitchhiker and get directions from a creepy auto mechanic. Their joyride quickly dissolves in a bloody massacre that turns staples of Americana such as the suburbs and barbecue into a waking nightmare.