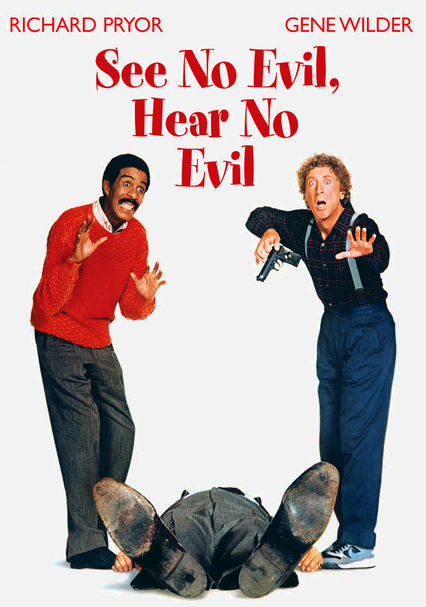 1989 R 1h 42m DVD
Wally Karew is blind, and Dave Lyons is deaf. But when a man is murdered right outside the newsstand where they work, the police collar the unlikely duo and tag them as the primary suspects.

Parents need to know that while this movie's absurd premise might seem to make it pretty kid-friendly, its full of cussing and shouting, and unpleasant good guys. People are killed, hostages are taken, cars are driven irresponsibly and stolen. There are a few graphic jokes about sex and a female nudity is shown.

In one creepy scene, Wilder's Dave points a gun and the sexy killer who must drop her towel to put her hands in the air. She is helpless and naked (breasts are shown) and Dave ogles her with lust and kisses her -- at gunpoint. Later the blind Wally cops a protracted feel when he is attempting to capture and apprehend Eve.

Characters are shot dead, punched, smacked, and knocked out. Guns are wielded and fired, hostages are taken.

Gratuitous and ubiquitous bad language with a whole lot of the "f' word.

Of course this comedy is terribly un-PC to make light of disabilities, but it's also a product of another time. Nobody displays good behavior, least of all the hapless heroes, who are rude, crude, and imbecilic. And disrespectful to women. The police are not much better behaved and, in fact, the villains are the most polite, courteous, and sophisticated of the whole lot.