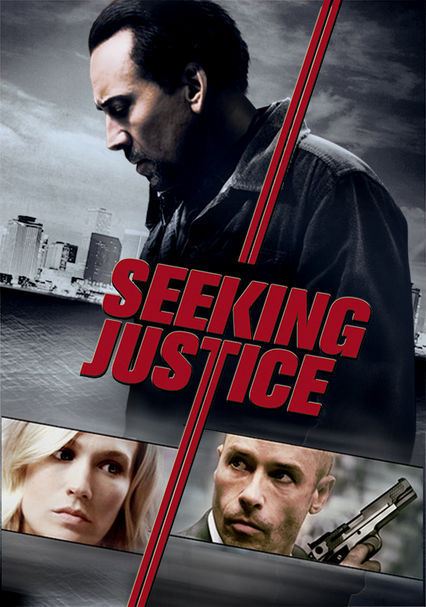 2011 R 1h 45m Blu-ray / DVD
After his wife is brutally raped, English teacher Will Gerard is approached by a man from a vigilante group who offers to exact revenge on the perpetrator. But once the deed is done, Will discovers that the group expects a certain favor in return.

Parents need to know that Seeking Justice is a "deal with the devil"-type paranoid thriller in which the main character tries to correct his mistake but can't trust anyone -- and resorts to plenty of illegal activities even while trying to make things "right." Violence includes a rape (which is more suggested than shown), as well as guns, fighting, some blood, and death. A teacher punches a large, tough-looking teen student in one scene. There's one quick but strongly suggestive sex scene (no nudity). Language isn't constant but includes several uses of "f--k" and "s--t." Minor characters are shown getting drunk. Except for die-hard Nicolas Cage fans, this movie will only spark a passing interest in most teens.

The main couple has one sex scene in bed, under the covers. No nudity is shown, but there's kissing and thrusting.

A woman is raped, though the act is suggested more than shown; viewers see her afterward, in the hospital, covered in cuts and bruises. Later, she's kidnapped and held at gunpoint. Minor characters are killed, smashed by cars, and fall from heights. Guns are drawn, and characters are shot. Some blood is shown. Lots of chases, in cars and on foot; also fights and punching -- a teacher punches a large, tough-looking teen.

The movie looks at a "deal with the devil" -- involving violence and revenge -- that goes awry and the subsequent ethical choices made to set things right again. But while the main character's intentions are at least somewhat admirable, his methods aren't.

Some journalists are shown getting drunk at a colleague's memorial service. The main characters have glasses of wine with dinner (no drunkenness).