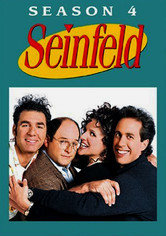 1992 NR 4 discs
The pioneering show about "nothing" picked up an Emmy for Outstanding Comedy Series in its memorable fourth season, which finds Jerry (Jerry Seinfeld) and George (Jason Alexander) trying to make a pilot for NBC about the minutia of their lives. Other memorable episodes follow the friends' misadventures with a smelly car, an unintentionally provocative Christmas card, and an infamous contest that pushes their self-restraint to the limits.