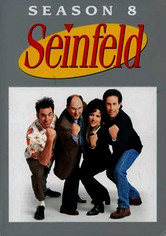 1996 NR 4 discs
As the eighth season of this Emmy-winning sitcom opens, Jerry (Jerry Seinfeld), George (Jason Alexander), Elaine (Julia Louis-Dreyfus) and Kramer (Michael Richards) are all about to embark on fresh starts of their own. George is newly single after the unfortunate demise of his fiancée. Meanwhile, Jerry's fresh on the heels of his own fractured engagement, Elaine takes over as president of J. Peterman, and Kramer finds perspective through karate.