Sema: The Warrior of Ayodhaya 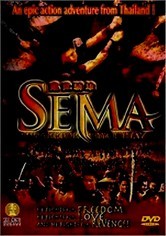 Sema: The Warrior of Ayodhaya

2002 NR 1h 43m DVD
Set in 18th century Thailand, this martial arts drama follows the adventures of Sema (Vorapat Keawpat), a swordsmith's son who takes a job in the household of a wealthy man and promptly falls in love with his master's beautiful daughter. With the girl's engagement to another man, their romance seems doomed. But when Sema tangles with a Burmese general, he regains his reputation -- and the chance to win the hand of the woman he loves.