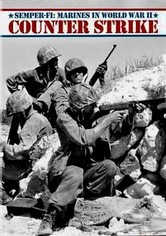 2007 NR 1h 35m DVD
With the bombing of Pearl Harbor during World War II, the Pacific became center stage for numerous hard-fought battles waged to halt Japan's thrust west and south. This documentary takes a close look at those clashes. Following the fighting from the Philippines to the Gilbert Islands and beyond, the film shows how the Marines destroyed Japan's lines of defense and halted its mighty war machine in pivotal Pacific-theater battles.