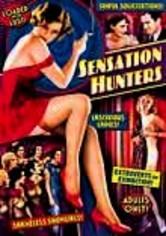 1933 NR 1h 5m DVD
A desperate woman resorts to desperate measures to save the life of her friend in Charles Vidor's gritty drama. Set at the height of Panama's mining era, the story centers on newly arrived cabaret girl Dale (Marion Burns), who's taken in by streetwise Jerry Royal (Arline Judge). Dale falls for a married millionaire, but the union ends in tragedy, and when Jerry falls ill, Dale's forced to turn tricks to pay the bills. Preston Foster co-stars.