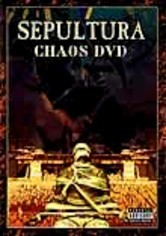 2002 NR 2h 11m DVD
Exotic metalheads Sepultura fire off uniquely Brazilian-flavored riffs like no other heavy metal band can in this chronicle of the albums "Under Siege (Live in Barcelona)" and "Third World Chaos." Highlights include the "Under Siege" concert in Barcelona and various "Third World Chaos" venues, including Red Rocks and Brazilian Festivals. Also featured are interviews and four videos from "We Are What We Are."