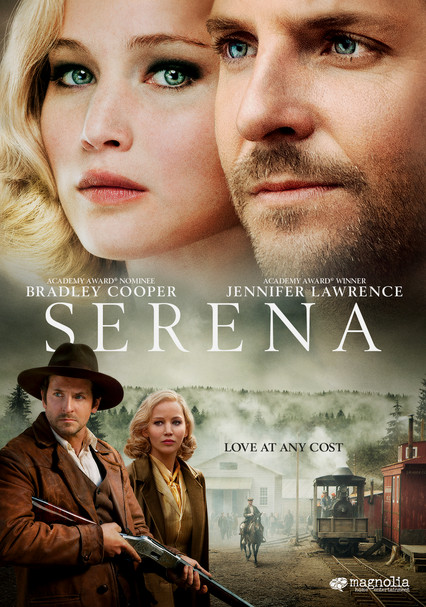 2015 R 1h 49m Blu-ray / DVD
As most of America is mired in the Depression, George Pemberton and his wife, Serena, build a booming timber business together. But the family legacy becomes a knotty issue after Serena learns that she's barren -- and George has an illegitimate son.

Parents need to know that Serena is a a Depression-era drama that starts as a love story -- Bradley Cooper and Jennifer Lawrence star as a timber baron and his bride -- but eventually becomes a bleak tale of tragic obsession. There are several love scenes that feature stars in the throes of passion (though no graphic nudity), some drinking, and several characters who smoke (accurate for the era). There are also a few brutally violent moments (a man choking a woman nearly to death, a point-blank shooting, a bloody fight with a razor blade, a man being crushed by a log, etc.) and mature themes, including jealousy, corruption, and illegitimate children.

Plenty of kissing; several sex scenes showing a couple in the throes of passion. Lots of motion and sounds, but -- with the exception of a brief glimpse of the man's bare backside -- no graphic nudity. Several scenes show people bathing (no sensitive nudity).

A woman encourages her husband to commit murder. When he balks, she takes matters into her own hands. He retaliates by choking her almost to death. Two men get into a brutal fight; one wields a straight razor that leads to a bloody conclusion. A man is shot in cold blood during a hunting expedition that's made to look like an accident (few people are fooled). An accident at a logging camp leaves a man crushed. A hunter is attacked by a panther.

Infrequent language includes sparing use of "bitch" and "s--t."

Love doesn't always conquer all -- not when people lose sight of right and wrong in their zeal to protect their partner and their relationship.

No references to modern consumer products, but the film's main theme is how a wealthy man will do almost anything to keep his fortune.

Many characters smoke cigarettes and cigars throughout the film (accurate for the era). Also frequent drinking -- at saloons, parties, and sometimes at home alone. A woman gets quite drunk during a large social event.