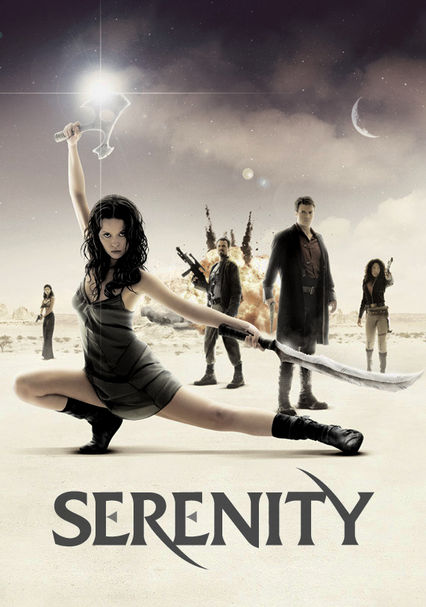 2005 PG-13 1h 59m Blu-ray / DVD
Malcolm Reynolds, captain of the ship Serenity, picks up two fugitives from the powerful coalition ruling the universe. Mal and his mates find themselves at the center of a cosmic conflict, pursued by military forces and space-roaming savages.

Parents need to know that the movie based on the cult TV series Firefly includes some rambunctious action, drawn from both Western and science-fiction conventions. They fight with their fists, guns, and other implements; they also engage in chase scenes on speedy hovering vehicles. Space battles -- between space ships -- result in some raucous explosion and shoot-out scenes. Some aggressive, martial-artsy fighting. Characters drink and smoke in a bar. One couple kisses and looks to be headed to off-screen sex; one character has designed a robot to service him (the implication is that she's a sexual companion). A woman crewmember sees her husband killed, suddenly and brutally.

Some sexual references; some women wear midriff- and cleave-baring outfits.

The Alliance representatives use violent means to get their way; the Reavers are ferocious killers who eat human flesh.

Drinking and smoking in a bar.