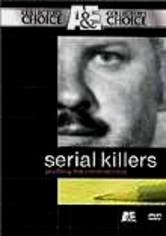 1999 NR 2 discs
As part of this collection of A&E Television's spotlight on serial killers, ex-FBI Agent John Douglas (who developed criminal profiling) takes us into the psyches of the 20th century's most infamous murderers: Wayne Williams, Charles Manson, John Wayne Gacy and Jeffrey Dahmer. Using archival photos and interviews, along with clips of the victims' families in court, these reports attempt to unlock the secrets of a killer's mind.