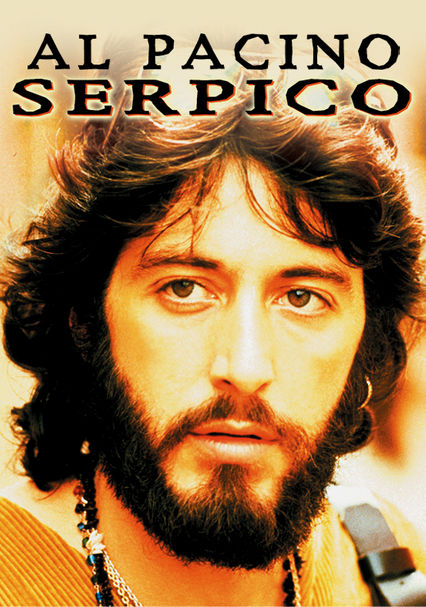 1973 R 2h 10m DVD
Undercover cop Frank Serpico is an honest man who is threatened and wounded for refusing to take part in corruption. Based on a real-life story, this engrossing biopic is a testament to one man's effort to reform the New York City Police Department.

Parents need to know that this dark police drama deals with adult issues such as dishonesty, brutality, and corruption of law enforcement officers throughout a big city police department. There are numerous violent and suspenseful scenes which include an attempted rape, the beating of handcuffed prisoners by policemen, chases and take-downs on foot and in vehicles, fighting and gunfire. A man is shot in the face, then shown wounded and bloody during several sequences. The hero is in danger through much of the film. There is partial nudity (bare breasts) in romantic scenes, with no explicit sexual activity other than kisses and embracing. Characters drink and smoke; the main character gets very drunk in a club.

Some kissing and embracing, no overt sexual activity. Partial nudity (bare breasts) in numerous romantic scenes, including one in which a man and woman take a bath together and are seen from the waist up. Police officers are portrayed as "peeping toms" as they watch an unseen woman undress in a nearby apartment. Accusations of homosexuality are made against a police officer, referencing oral sex.

An early scene shows a beating and attempted rape. The female victim, clothes torn and breasts bare, is rescued by NYPD officers. A policeman brutally kicks a handcuffed prisoner; a second prisoner's head is pushed into a toilet. A man is shot in the face and is shown bloody and wounded in several scenes. In addition there are scuffles, car chases, and guns are fired.

It is brave and just to fight corruption, regardless of the personal cost. One person, if willing to put him or herself at great risk, can bring about major change.

Lots of social drinking (champagne, wine, beer). One sequence shows the hero drinking and getting very drunk at a club. Police officials pass out marijuana cigarettes to a squad room, hoping to "teach" the officers the affects of smoking and to recognize the smell; the scene results in some merriment as the officers get stoned. Serpico and others smoke cigarettes throughout.