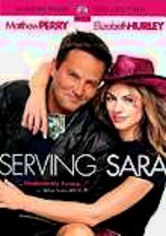 2002 PG-13 1h 39m DVD
Joe Tyler gets more than he bargained for when he's asked to serve divorce papers to Sara Moore. Unwilling to give up the money she helped make for her cattle baron husband, Sara proposes a deal: If Joe helps her, she'll cut him in on the proceeds.

Parents need to know that Serving Sara is a 2002 movie in which Matthew Perry plays a New York City process server who is sent to serve divorce papers to a jilted wife played by Elizabeth Hurley who has plans to get even with her philandering Texas oil millionaire husband. There is frequent profanity, including "a--hole," "s--t," "son of a bitch," and "numb nuts." Characters are selfish, greedy, and not very likable; two rival process servers lie, cheat, and do everything they can to prevent the other from succeeding, even going so far as to open a pet crate at an airport so a vicious dog can attack the rival and leave large, bloody claw marks on his face. This same character is later shot in the rear end while trying to spy on a Texas ranch. To get a free room, a character raises her shirt and exposes her breasts (not shown) to the motel clerk. In a scene on a ranch, the lead character, mistaken for a veterinarian, is given the unpleasant task of sticking his hand into the anal cavity of an impotent bull so it will be aroused and inseminate a fake cow painted with lipstick to resemble a woman, which is shown moving in a sexual rhythm once the bull is aroused. The humor is largely cynical and negative, and there are instances of humor being used to fat-shame.

Characters shoot guns at each other, get into fistfights, try to run each other over with cars, trucks, and monster trucks. A man is beaten up by mobsters, and later this same man is beaten up by a fitness instructor. Character is knocked unconscious when a six-pack of beer is dropped on his head. To get out of a jam at an airport, one of the lead characters opens a pet crate and pushes it towards his rival; the dog emerges and attacks his face, leaving large bloody claw marks that are visible for the rest of the movie.