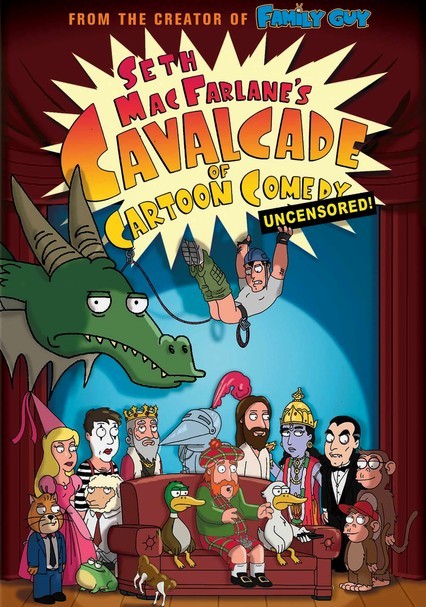 2009 UR 0h 54m Blu-ray / DVD
Seth MacFarlane (creator of TV's animated hit "Family Guy") offers up this collection of outlandish cartoon shorts from his YouTube venture, featuring all-new episodes deemed too outrageous for TV or the Internet. These fearless clips are uncensored, so they may not be appropriate for all family members. Fellow "Family Guy" vets Rachael MacFarlane, Alex Borstein, Mike Henry and Jeff Bergman provide vocal talent.

Parents need to know that this collection of animated comedy shorts is definitely not aimed at kids. Many of them start with well-known fairy tales, popular TV characters, and well-known pop-culture icons, and then creator Seth MacFarlane adds a generous dose of adult humor, including plenty of profanity, drinking, and lots of sex (including straight sex, gay sex, and bestiality). There's some cartoon nudity and some pretty explicit under-the-sheets action, with obvious thrusting and even more obvious moans and groans.

Lots of animated sex, including straight sex, gay sex, and bestiality. Theres graphic nudity, including close-ups of animal genitalia, and plenty of sex scenes, generally under the covers but with vigorous, obvious thrusting, accompanied by lots of moaning and groaning. Some scatological humor as well.

Only a handful of the vignettes include violence, but they can be quite graphic; when a massive boulder falls on a helpless animal, the onscreen result is an oozing bloody pulp, just like it would be in real life, but certainly not in most other cartoons.

Very coarse, including f-ck, sh-t, a"hole, boner getting wood and much more.

This collection of animated vignettes draws much of its humor from placing animated characters in situations that seen completely mundane, juxtaposing the wacky and the ordinary. Many of the characters talk and act much like real people, including dialogue laced with casual profanity, plenty of drinking, and lots of sex.

Plenty of references to well-known pop culture characters, including the Muppets, Star Trek, the Roadrunner, and others.

Plenty of drinking and some drug references.