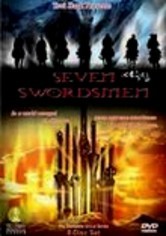 2004 NR 8 discs
Vincent Zhao, Ray Lui, Ada Choi and Patrick Tam co-star in this epic Hong Kong television series presented by Tsui Hark, based on a classic martial arts novel by Liang Yusheng. Set in 17th-century China, the action follows the collective struggle of seven kung fu masters -- each of whom carries a sword that represents one of seven states of being -- to stay alive amid political upheaval.