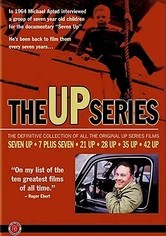 1964 NR 1h 32m DVD
When Seven Up was broadcast in 1964, it broke new ground and became the first segment of a laborious and momentous labor of love: an engrossing chronicle of the lives of 14 students from varied social backgrounds, beginning when they were 7 years old. The first meeting with the group of wide-eyed, innocent children invites viewers to take a look at lives in the making; the follow-up film, 7 Plus Seven, checks in on them 7 years later.