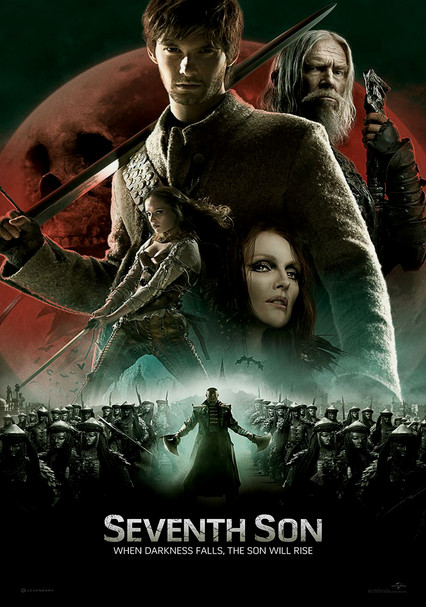 2015 PG-13 1h 42m Blu-ray / DVD
In the 18th century, apprentice exorcist Tom Ward is the lynchpin in a battle between good and evil when imprisoned witch Mother Malkin escapes. This chilling tale is based on the first installment in Joseph Delaney's "Wardstone Chronicles" trilogy.

Parents need to know that Seventh Son is a very loose adaptation of The Last Apprentice series by Joseph Delaney, with an aged-up protagonist (presumably to up the heartthrob factor) and only a passing similarity to the books. There's a surprising single use of "f--k" (used in exasperation), and there's more immediate passionate kissing and romance than in comparable YA fantasy adaptations. In one scene it's even implied that a teen couple has had sex, based on their position on a bed and the way the girl's top is loose and off her shoulder. The violence is on par with other fantasy series, but it's still disturbing when people are burned to ash, swallowed (the evil witches turn into animal familiars, like dragons and leopards), or killed with swords and other medieval weapons.

Thomas and Alice flirt from the first time they meet; they kiss passionately several times and eventually make out; the scene then fades into a shot of them lying next to one another, drowsy and embracing. The scene implies that they could have made love, but it's left unclear.

Many characters die, some in horrifying ways. Master Gregory kills witches by burning them. The Witch Queen and her cronies turn into their animal familiars and destroy a town, killing many innocent citizens; although there's no blood, residents are burned, crushed, and, in one case, swallowed/eaten. Some confrontations are hand to hand, with weapons like swords, knives, chains, and staffs. Some of the witches fight as their familiars -- dragons, bears, leopards, etc. -- which adds to the violence as they bite, roar, and jump on people.

Thomas' mother urges him to clear his heart of grief and fill it with courage. The storyline encourages people to question immoral rules and stand up for what they believe.

Master Gregory is always drinking from a flask; he never goes without it and seems almost like an alcoholic.