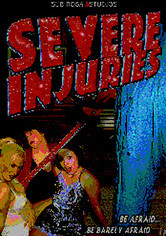 2003 NR 1h 6m DVD
Melvin Hubble (Charlie Fleming) is a wanna-be serial killer who's never been able to carry out the ultimate crime: murder. Desperate to join the pantheon of history's bloodthirsty criminals, Melvin and his followers target a house full of sorority girls, determined to pick off each of the members one by one. But Holly (Lilith Stabs), Lauren (Amy Lynn Best) and the rest of the gang have more fight in them than anyone had thought possible.