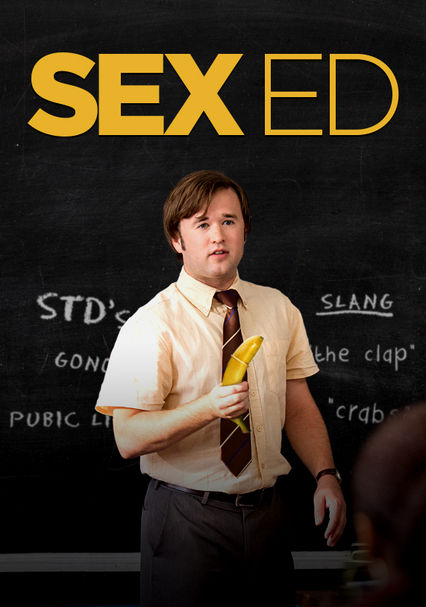 2014 NR 1h 30m DVD
After starting his first teaching job at an urban middle school, Eddie Cole learns that the students aren't receiving any sex education, and he's determined to fix the situation. But Eddie is still a virgin -- which soon leads to comic complications.

Parents need to know that Sex Ed is a 2014 comedy in which Haley Joel Osment plays a teacher who begins a crusade to educate the detention class he has been assigned about sex, despite being a virgin. From beginning to end, this movie is crass and vulgar. There is frequent profanity, including "f--k." Tweens speak openly about anal sex, nudity on Snapchat, "pulling out," and much more. Though on one level, this is intended to show how much tweens learn about sex from their friends and media, in the overall context of the movie -- where adult characters try to have sex in bagel store bathrooms, have sex involving oil and role-playing in their apartments, and make jokes about acts seen in pornographic movies -- this point is muddled, and it's hard to tell if the tween sex talk is supposed to be part of the joke. Which is unfortunate, because if this movie had taken the frat-boy vulgar humor down several dozen notches, this could have been a great opportunity for parents and tweens to discuss what they've heard, what they know, and what they don't know about sex. But unfortunately, the unrelenting attempts at shock-humor make this one inappropriate for kids.

Frequent sex talk, much of it crass and vulgar. A roommate walks in on his roommate and girlfriend having sex in his bed. He later walks into his apartment and finds them in the living room having sex with oil while role-playing. A woman in an alcoholics' support group exposes her breasts to the lead character in public. The lead character picks up a prostitute, thinking it's a woman, but the prostitute has a noticeable erection bulging from his skirt. Talk of acts performed in pornographic movies. Two characters at a bagel shop ask if they can have sex in the rest room. In the opening montage, scenes of old sex-ed movies are interspersed with scenes of condoms being placed on sex toys and cucumbers. Tweens ask inappropriate questions about anal sex, Snapchat, and "pulling out," and this seems to be done more for the sake of comedy than to show that tweens already have an extensive knowledge of sexual acts.

Frequent profanity. "F-k" constantly used. References to acts in pornographic movies. A character is told by his friend that he gives off a "rapey vibe."

Though the movie attempts to make the point that sex education should be taught to tweens because otherwise they'll be misinformed about it by their friends and the media, that message is muddled by the unrelenting crass and vulgar humor.

Characters drink beer, shots of rum. The lead character's boss drinks and smokes cigarettes in his office. References to cocaine. The lead character drinks too much at a dinner party and vomits on the mother of his love interest.