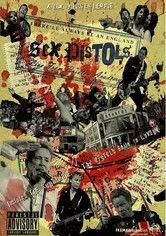 2007 NR 1h 10m DVD
Recorded in 2007 at London's Brixton Academy, this live concert features Sex Pistols Johnny Rotten, Steve Jones, Paul Cook and Glen Matlock reuniting to play classics such as "Pretty Vacant," "God Save the Queen" and "Anarchy in the UK." Directed by longtime Pistols associate Julien Temple, the program also includes The Knowledge, a documentary that follows the band members as they revisit their old hangouts.