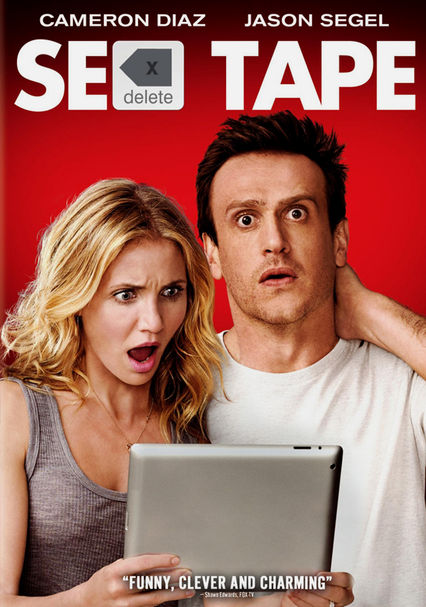 2014 R 1h 34m Blu-ray / DVD
A married couple (played by Cameron Diaz and Jason Segel) wake up to discover that the sex tape they made the evening before has gone missing, leading to a frantic search for its whereabouts.

Parents need to know that Sex Tape -- a raunchy but funny comedy about a couple trying to rekindle the passion in their marriage -- is definitely too mature for young teens and tweens. First off, there's the subject matter: sex, and the creation of a sex tape, and the problems and hilarity that ensue from that decision. There's also the exploration of a marriage's failings, which may go over the head of younger viewers. Given the plot, there's plenty of nudity (though no genitals are shown) and salty language (including "f--k" and "c--t"). Consumerism is rampant: Just about everyone has an iPhone or a Mac laptop or some other Apple product. Drugs and alcohol are used, and there's some violence played for laughs (a man hits a vicious dog, shoves it up against a wall, and falls off a balcony with it).

A man meets his match in a vicious dog that attacks him. He hits the dog, shoves it up against a wall, and falls off a balcony with it. One of the characters rams his SUV into a garage door in an attempt to break in. A young boy tries to blackmail an adult, and they have an argument in which both of them curse each other out. Two people attack a bank of computers with baseball bats.

Amid all the over-the-top shenanigans is the message that marriage is teamwork, and couples need to be on the same team for a family to be happy. Also, sometimes catastrophes happen, but they lead you to a better place.

Just about everyone has an iPhone or a Mac laptop or some other Apple product. iPads are a prominent part of the plot. One character even comments on how resilient the casing is and how it protects the device from breakage.

A woman does a line of cocaine with her boss. A couple does tequila shots, to the point of oblivion.