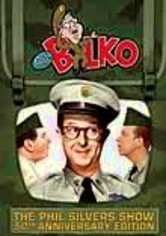 1955 NR 3 discs
Sgt. Bilko (Phil Silvers) always has a handful of tricks up his sleeve, proving him to be one of the most likeable hustlers the military has ever seen. Celebrate his brazen and hilarious disregard for law and order in pursuit of the big payday in this collection of the television series' most memorable episodes. Extras include Silver's appearances at the Emmy Awards, at the Friar's Stag Roast for Humphrey Bogart and much more.