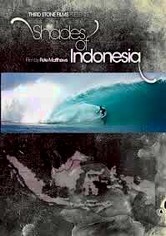 2008 NR 0h 50m DVD
Pete Matthews examines the impact of surfing on the traditional culture of Indonesia, combining wild action footage from its world-famous breaks with images depicting the developing nation's fascinating blend of religion, family and ancient customs. Indonesia is not only a prime destination for surf tourists -- the film also explains how its natives have taken to the sport and have emerged as a growing force on the international surfing scene.