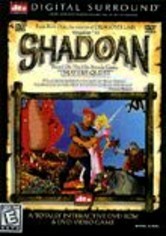 1999 NR DVD
With this interactive video adventure (based on the arcade game Thayer's Quest), you'll control the action as you travel through the fantasy world of Shadoan to help unlikely hero Lathan Kandor find and reassemble the five pieces of a magical amulet. But to succeed in his quest -- and be reunited with the beautiful Princess Grace Delight -- Lathan will have to vanquish a malevolent wizard named Torlock.