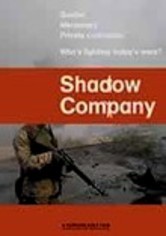 2007 NR 1h 26m DVD
Warfare isn't what it used to be. This fascinating documentary provides a look at the thousands of private contractors who work closely with the military to perform dangerous missions but whose role often goes unnoticed by the public back home. Are they mercenaries -- or merely civilians performing military tasks? Filmmakers Nick Bicanic and Jason Bourque explore the myriad impacts of waging a new kind of war with a new kind of soldier.