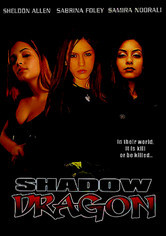 2005 NR 1h 38m DVD
Sheldon Allen, Sabrina Foley and Samira Noorali star in this tense thriller about a tough young drug smuggler who must bump off a powerful drug lord. The only surviving member of a female motorcycle gang gets primed for her mission by training with top assassin Shadow Dragon, unaware of his true identity. Meanwhile, a serial killer targets members of the drug cartel, and it's up to two detectives to apprehend the would-be murderer.