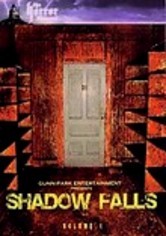 2006 NR 3h 20m DVD
Something unearthly lurks in the town of Shadow Falls in this original Horror Channel series. Among the stories in the show's chilling first season, the town draws a man searching for his lost daughter, and a malevolent creature torments two teens. In further tales that reveal Shadow Falls' hidden secrets, a missing boyfriend suddenly summons his girlfriend with a valentine, and tapes from the local hospital materialize in an antique store.